However, not all companies enjoyed the same rate of growth. During this five-year period, many companies went out of business, while many new ones were born. At the same time, some of the existing companies had to adjust their filing strategies due to various reasons, including budget constraints or a change in a technological roadmap, which resulted in a drop or increase in their patent counts.

This week, we will identify and examine the fastest growing companies, ranked according to the number of issued patents over the last five years.

Analyzing the activity of the fastest growing companies will provide us with some insights about the technological areas that are going through a growth phase and receiving the greatest amount of capital. It also shows companies, and perhaps countries, which have implemented the right policies to encourage innovation, which will result in economic expansion.

While there are several ways to identify the fastest growing companies, we decided to look at the absolute growth in the number of issued patents from 2014 to 2018. This may exclude some of the smaller companies with large percentages of growth, but most likely, it highlights the companies with the largest growth in terms of dollar amounts in their R&D budgets. 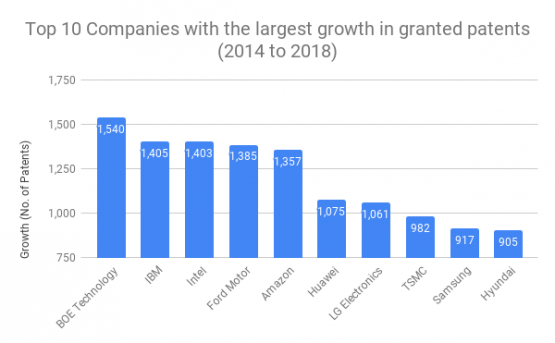 Here are some observations from the chart:

Here are some interesting facts extracted from this table:

Given that filing usually happens a few years before the actual product is released, the above grant numbers in 2018 show that these companies had started to change and update their filing strategies a few years ago (e.g., around 2014 or even earlier).

We also looked at the fastest growing companies in terms of percentage. Again, for the purpose of this study, we limited our analysis to only the top 1,000 most active companies in 2014. The following chart shows the top 10 companies by percentage of growth over the last five years. 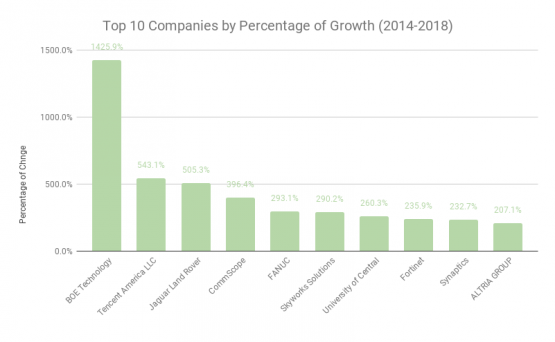 Back in March, Patexia released its Patent Prosecution Intelligence Report, which included the list of the top 1,000 most active law firms and companies, featuring many metrics related to their performance and activity in an Excel format. The report provided our corporate partners with information to evaluate their current counsel and measure how they stack up to other law firms. Later, we released our online tools as part of our Patexia Concierge Service, which provided not just the reports but direct access to information for more than 15K examiners, 70K attorneys, 20K law firms, and 600K companies.

In the following weeks, we plan to look at the companies with the sharpest decline in the number of issued patents and see what sort of insights we can extract from that analysis. Stay tuned.