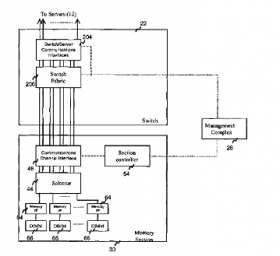 The '662 patent is owned by Parallel Iron, whose attorneys have recently filed suit against Internet giants such as Amazon, Facebook, and LinkedIn, and even some heavyweight finance names such as Morgan Stanley and Citigroup (whose resources and lawyers may provide us with a serious fight).

The good news is that the proceedings will be held in the District Court of Delaware instead of the Eastern District of Texas, which means that there won't be any of the latter's historical receptiveness toward patent trolls. Not that I'm saying Parallel Iron is a patent troll. Nor am I saying that the company's predecessor, Ring Technologies, was a patent troll when it filed its 2009 memory suit against A-Data, Elpida, Hewlett Packard, Hitachi, Micron, Nanya, Samsung, Smart Modular Technologies, Sanmina, Dell, IBM, Sun Microsystems, and Kingston Technology... in the Eastern District of Texas.

These names are unknown in the tech world (except for references to litigation), but a name that is fairly well known in those circles is that of Doug Cutting -- whose son had a toy elephant named Hadoop. Cutting's work on distributed data processing drew from the MapReduce technology developed by Google, and he was hired by Yahoo to work on similar efforts.

Ultimately the Hadoop Distributed File System (HDFS) became an Apache project, an open-source collaboration by like-minded programmers and developers all over the world. Microsoft and Facebook, among others, have been exploring the many applications of HDFS -- and Parallel Iron says that all of them have stolen it, and now owe them money.

Of course, this begs the question of whether "a person skilled in the art" couldn't have come up with the technology that Parallel Iron claims in their patents. In addition to Cutting, both Google and Yahoo had been developing distributed data solutions for some time, and implementing them well before the later two patents owned by Parallel Iron. Even the '662 patent, filed in 2002 and granted in 2007, was concurrent or even preceded by the work that became HDFS.

The claims in the '662 patent bring to mind the definition of RAID (Redundant Array of Independent Disks) with "memory sections" taking the place of hard drive components. In case this is at all relevant, RAID was developed in 1987 -- and you won't find Patterson, Gibson, and Katz suing everyone who uses striped or mirrored HDDs. Not even in the Eastern District of Texas.

Patent trolls cost everyone a lot of money, and there's been an increasing amount of criticism that the current patent system is in need of an overhaul, especially regarding software and method patents. When non-manufacturing shell companies such as Parallel Iron are allowed to sue actual companies that develop and use actual products, the term "patent troll" may be fairly used.

I have no direct evidence of prior art that would cast doubt upon the '662 patent, but it is very difficult to believe that none exists. The claims are sufficiently broad enough to refer to very different applications, and the novelty seems much in doubt given that Google and Yahoo developers produced stacks of white papers and other material documenting their work in the same areas.

Utility is usually a given for most patents (unless they're obviously ridiculous, and even then, the USPTO has some fun examples of patents that no reasonable person would consider). But it's worth examining the larger question of utility, and doubting that the "technological pioneers" at Ring Technologies ever had any intention of putting the patents to use outside the courtroom.

The claims are clearly laid out, and the examples indicate possible applications. The technology is grounded well enough to avoid any challenge on the grounds of Utility. Date of filing establishes a certain amount of precedence. The reference to hardware somewhat mitigates the usual objections to software patents.

There is very little reason to believe that "a person skilled in the art" wouldn't or didn't come to the same solutions during or before the filing date. The actions of Ring Technologies and Parallel Iron strongly suggest that the patent was less about invention and more about litigation.

Enjoyed this article? See the latest in our Newsfeed.

Related Organizations
Graco a Minnesota Solar Thermal Consultants Pty. Limited RETRONIX, INC.
Tags
cloud computing patent troll Big Data memory
Share
Previous Post
Next Post
3 Comments
Wes BoudvilleThe comment above about ' There is very little reason to believe that "a person skilled in the art" wouldn't or didn't come to the same solutions during or before the filing date' is inaccurate on basic principles. I'm referring to "wouldn't". That is NOT an objection to a patent. If say for 10 years before a patent was filed, a person skilled in the art could have made it [or filed a patent application]
Feb 26, 2015
Wes Boudville[continued from previous posting] but no one did, then this can be used precisely as an argument for non-obviousness.
Feb 26, 2015
Wes BoudvilleBecause no one invented the invention prior to the actual filing date, and all the starting points of the patent were present. This is related to a recent quote by a Supreme Court jurist who said regarding non-obviousness that for any patent, anyone who objected to it could merely say, after disclosure, that the patent was obvious. It is never enough to say that it is obvious. One has to raise more precise points about the patent vis a vis the prior art. And one of the arguments for non-obviousness that can be made by the patent inventor is like judo - what I mentioned above.
Feb 26, 2015
2nd Annual Patexia Mixer