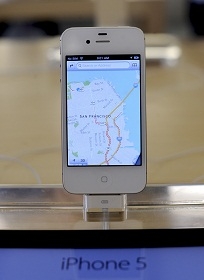 The controversy swirling around Apple Maps reveals a fundamental difference between Google and Apple business models that can’t be measured in mobile market share. Despite being replaced, Google Maps has proven not only to be the more polished app, but also a harbinger of things to come. Apple designs slick stuff with a few faults. Google harnesses giant data sets and systematically turns them into user gold. In short, Google executed a Big Data advantage over Apple that won’t end with maps.

Apple’s map-app blunder polarized a nation of smartphone enthusiasts, leaving many calling for Cupertino’s end of days. Others defended Apple Maps, claiming both error-free iOS 6 trips and a deep admiration for Apple CEO Tim Cook’s admission of mapping failure. Steve Jobs conditioned Apple culture to show no signs of weakness, or ever apologize for technology. The problem is Apple users have been conditioned to expect bold perfection, and instead got a technology apology.

Turns out, Apple Maps is more style than substance. Reviewers didn’t know what to make of the gorgeous aesthetics framing melting bridges and misplaced neighborhoods. Other complaints included no street views, weak traffic reporting, no public transportation, and missing labels on schools and hospitals. At this point, with such a functional mess, it’s no wonder Tim Cook sent iOS 6 adopters to Microsoft’s Bing, third-party apps like Waze, or even back to Google for better directions.

To remedy the problem Apple will partner with a reported 100 million users of iOS 6 to keep feeding location information back into Apple Maps, breathing good data in to replace the bad. MacRumors reported select Apple retail stores would be dedicating 40 hours of manpower a week to manual fixes in their local areas. This grassroots effort sounds more open-source than Apple.

With a bum app and a desperate fix -- and missing badly on a Jobs-like customer experience -- detractors shouted Maps might destroy the Apple brand. Mad Magazine parodied the application. How did Apple Maps get so lost? Alfred E. Neuman and iO6 make strange bedfellows.

First adopters tolerate bugs in an enterprise software release. Despite the trust technophiles place in smartphone navigation, and “consumer” expectations for not driving in circles, the iOS 6-user vibe seems forgiving, disappointing but not a deal breaker. A minor glitch on the way to a breakthrough app. Apple even explained, or rather defended its escape from Google Maps by portraying the iOS 6 mapping software as a beta version, careful not to sabotage iPhone 5 sales. And Apple had a previous hiccup with iPhone 4’s antennae yet is still the biggest company in the world.

In fact, Google and Apple both began by licensing petabytes of mapping data from TomTom, a geodata vendor with its own map app. And just like Apple plans to do, Google Maps solicits corrections from users, too. Heated competition between iOS and Android explains Apple’s desire to go their own way and develop an elegant mapping tool for the masses. Google withheld key features such as vector maps and spoken directions from previous Apple versions, later planted in Android phones. 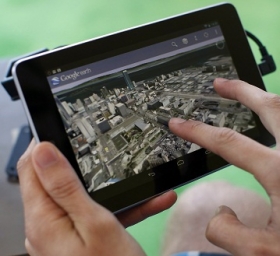 Moving forward, Apple Maps works with Siri and boasts other attractive features, including 3-D views of your route and turn-by-turn directions. Apple stands behind most of the underlying data driving Maps -- most of it’s right. But the technology and usability gaps between the competing apps look and feel impossible for Apple to close. Which makes sense because Google had already set the mapping bar too high.

Google thrives on data. They made their bones feeding us strategic ads based on user-generated data. Google Maps, in turn, aids and abets the advertising revenue stream. Because each time we activate the app, location data pipes back to Google providing intelligence for location-based deals and advertising.

For Apple, huge data sets with tiny problems compound into bigger problems witnessed today in their mapping software. Google has been in the lab for years adding value to piles of data gathered from cars equipped with cameras and GPS equipment, trolling cities and streets, hunting homes and businesses missing from their physical information. Beyond the naked eye, Google image-recognition software slices and dices photos into business signs and street names. Man and machine fine-tuning data for better directions and awareness.

As for Apple Map’s jagged edges, Google has built and refined algorithms through lots of gritty effort. Then smoothing them out to help render the seamless location images we enjoy from Google Street View. For comparison, Google’s Street View may best represent the current chasm between companies. A chasm widened by default and inertia when evaluating what else Google has mapped, what other mapping genius Apple must contend with.

Using satellite imagery, aerial photography and GIS 3-D globe, Google Earth flipped from leisure gimmick to a power tool for disaster recovery and wildlife protection. Google Sky morphed out of Earth, delivering an educational trip through the stars. Recently, Google acquired 360-degree images of the Great Barrier Reef from Catlin Seaview Survey, a series of scientific expeditions recording our oceans and reefs. Each capture is geo-tagged and can be recaptured for future study, or just viewing pleasure. Call it an embarrassment of data riches. Apple struggles finding your house.

Google stockpiles data from keystrokes, voice recognition, static images, and those with motion properties. Divers, desktops, tablets, smartphones and rigged vehicles, all data sources continuing to gain strength like a hurricane over warm water. Google engineered a self-replicating loop of structured and unstructured data culminating in a Big Data triumph over Apple Maps. 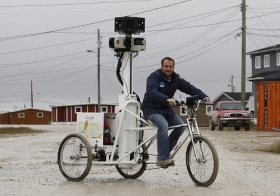 Google is every bit the mad data scientist. Some company initiatives resolve quickly into workable platforms for daily living and moneymaking. Others seem indulgent and off the beaten path of real-world application, even detached from the techno wizardry we crave nowadays.

Unthinkable hours spent gathering and massaging map data by hand contradicts our understanding of automation. The kind of brute force effort Google enlists to map the world for our convenience transcends the current Apple ecosystem addicted to high design and wild profit margins. According to The New York Times, Google’s photo cars have traveled five million miles, traversing 3,000 cities in 40 countries to deliver the directional goods. And with approximately 25 times more Google employees dedicated to mapping, Apple underestimated its rival.

Google Maps is simply an app, not an OS. A fickle luxury for some, a daily driver for others. But the deeper we take our devices to the edge, and the more we need mobile applications for lightweight computing, the clearer we see Google’s data edge. In this case, Google used sheer muscle to expose an Apple weakness, while at the same time speeding in the background to map space and the ocean floor with brains and an explorer’s spirit. Google wants to own your smartphone and drive your car, not just point you in the right direction. Looks like Apple has miles of data to go before it can compete.