The “smartphone wars” have become a watchword when discussing US and global patent litigation issues. The conflict between Apple and Samsung began almost five years ago and escalated into a full scale litigation war costing more than a billion dollars and spanning courts across four continents. While the pitched battle between Apple and Samsung has slowed, high stakes patent litigation has continued to be prevalent in the industry. However, with the late 2014 sale of the Rockstar/Nortel patents to RPX for $900 million, it looked to many like the the beginning of the end for smartphone wars with hope for licensing rather than litigation going forward. That being said, one longstanding set of conflicts might be drawing to a close, but the mobile device market is continuing to evolve, and looking at recent global trends, patent issues remain very much at the core. Have we really seen an end to the smartphone wars, or have we just exported them for now?

The landscape of the smartphone industry is shifting. Some aspects do remain constant, for example Apple’s iPhone sales remain strong, especially due to recent success in the Chinese market. In the first quarter of 2015 alone Apple sold  74.5 million iPhones, a 46% increase over the previous quarter. However, Samsung, which has been ahead of Apple in terms of sales since 2011, has seen declining numbers in 2014 and fell to even with Apple after Q4 sales were reported. Meanwhile one time key players such as Nokia, Blackberry, and Sony are no longer in the running for top vendor. 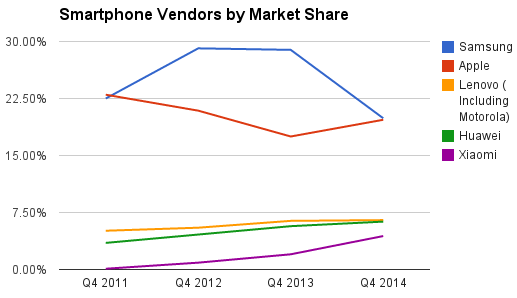 In recent years we have seen a number of interesting entrants from China. Some of the key players making their debut on the scene include Huawei, Xiaomi, ZTE and most recently OnePlus.  These are all firms bidding to join the major players in the industry, and based on 2014 figures, of the top five global smartphone makers, three are already Chinese companies: Huawei, Xiaomi and Lenovo (including Motorola). It doesn’t look like these firms will be left alone for long. In it’s first year of sales for the One, it’s first phone, OnePlus sold almost 1 million phones, a number limited only by production capacity, with demand indicating a much larger market for the affordable flagship alternative. However, there are some key issues still facing these companies as they rise to prominence. Most importantly, they grew up outside of the US IP market and in many cases neither own nor license the key patents needed to back up their products.

The first wave of conflict has already begun, but so far key clashes have been contained largely outside of the US. India has been a hot spot venue for testing the global expansion of the Chinese manufacturers. Ericsson sued Xiaomi in India, and in December 2014 successfully got a court order blocking the import and sale of Xiaomi products based on the claim that they had not licensed technologies allowing wireless devices to connect to networks. Also in December 2014, Indian consumer electronics company Micromax brought a case against OnePlus, successfully stopping the new manufacturer from selling its phones running Cyanogen software. Vringo and ZTE have faced off over patents in a number of global arenas throughout Europe and Asia, including Romania, the U.K., Malaysia and India. There has even been some infighting, with Huawei winning a case against ZTE in Germany.

The battles have commenced and they do not show any sign of slowing down, largely because of ongoing issues with the patent portfolios of the companies involved. Huawei and ZTE are perhaps the best off of the companies we are discussing. Huawei reported 36,511 patents at the end of 2013, and was granted an additional 493 patents by the European Patent Agency in 2014. The firm intends to continue investing in in-house R&D and announced  a plan to to spend at least $600 million over the next five years on 5G research. As of June 2014, ZTE  had 17,000 patents. Xiaomi, despite ongoing efforts, remains behind, filing 2,800 patents in 2014 in China, the US, Korea, and Japan. The company announced plans to double its patent filings in 2015 and then quadruple them for a total of 8,000 patent applications by the end of 2016.

So what does the future hold? For many of these firms, especially recent startups like Xiaomi and OnePlus, expanding sales outside of China’s borders will be like opening Pandora’s box. Xiaomi has announced plans to open an online marketplace for the US, but so far are not intending to sell their phones, which are accused of being extremely similar to the iPhone. Apple’s potential response to US sales is almost certainly a key consideration in their decision. Ongoing squabbles in India and other markets seem likely as new sellers find their footing and test each other’s boundaries. The real issues will come as they move towards exporting to mature markets in the US and Europe.  With the major relevant portfolios like Rockstar’s off the market, new entrants face a more difficult environment than their predecessors as they will be forced to try to negotiate licensing opportunities while they simultaneously try to build up their own portfolios to the point where cross licensing agreements become attractive to the older players.