February 2014 was supposed to be a landmark day for the 3D printing industry, as several key selective laser sintering (SLS) patents awarded to Carl Deckard in the 1990s were set to expire by the end of January. Just a few years prior, the industry was shaken up by the expiration of Stratasys’ US5121329 - Apparatus and method for creating three-dimensional objects, which covered the fundamental technology for fused deposition modeling (FDM. The result was an explosion in consumer 3D printing, highlighted by the formation of Brooklyn-based MakerBot Industries which built a line of affordable printers. The market went open-source and with hundreds of FDM machines on the market, prices dropped from $1,400 to $300 in a matter of a couple years.

Jumping back to 2014, MakerBot is now a wholly owned subsidiary of Stratasys, Sugar Lab has been acquired by 3D Systems, and we see a commercial 3D printing market that is once again dominated by a few major players (see Figure 1). Things have tightened up enough to catch the attention of the Electronic Frontier Foundation, which has recently started making efforts to free up the market by shifting development of 3D printing technology towards an open-source model. What changed between late 2009 and early 2014? What can explain the difference in how the expiration of Deckard’s FDM vs. Stratasys’ SLS patents affected the market? 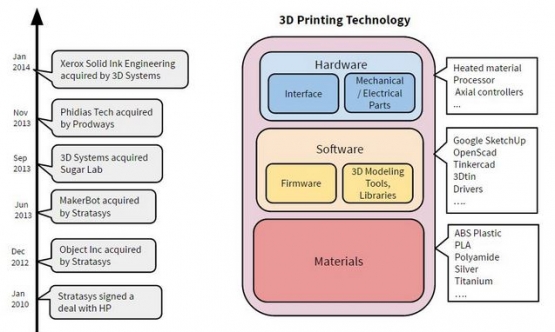 In the past 10 years, the USPTO has received 6,800 patent applications related to 3D printing technology, with an average of 700 filed each year since 2007. Based on the top six IPC codes (B29C - Shaping of Plastics, B32B - Layered Products, B41M - Printing, Duplicating, Marking, or Copying, C04B - Lime, Minerals, Slag, Cements, G05B - Control of Regulating Systems, and A61F - Filters Implantable into Blood Vessels) related to 3D printing, it becomes clear that the total intellectual property wealth is consolidated among a few major players, including two traditional industry giants Xerox (499) and Canon (739), and two relative newcomers Stratasys (124) and 3D Systems (174). 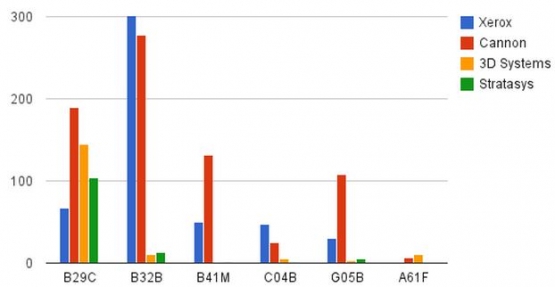 Looking at IP ownership across the top six 3D printing IPC codes, we see Canon and Xerox leading the way with 48.1% and 32.5% respectively, followed by 3D Systems with 11.3% and Stratasys with  8.1%. Referencing the technology breakdown in Figure 1, the traditional companies in the printing space have a stronger concentration of IP within hardware, including heated materials, processors, and axial controllers, while the newcomers have more patents within software and materials.

Considering the recent rate of patent filing in the face of 3D printing market consolidation, it is clear that intellectual property will maintain a high level of influence across the industry as it continues to mature over the next 10 years. Established companies are likely to continue their high rates of filing and treating the “smartphone wars” of the 2000’s as precedent, it can be expected that patent litigation will become more common as well. In fact, the past twelve months may be an early indicator of this trend, as 3D Systems has sued Kickstarter-backed Formlabs and Stratasys has sued Microboards Technology LLC for patent infringement.  What was supposed to be a groundbreaking year for 3D printing has ultimately been defined by the debate over protecting IP versus going open-source, concerns over longer term end-user patent infringement, and questions about how patents will continue shape the future of the industry.