On May 2, 2018, high-end fashion designer and retailer Burberry Limited filed a complaint in the Southern District of New York against big box retailer Target Corporation alleging trademark infringement and trademark counterfeiting (among other claims) for Target’s alleged “repeated, willful and egregious misappropriation of Burberry’s famous and iconic luxury check trademarks.”  Burberry claims that it first introduced its “Burberry Check” trademark in the 1920s for which it owns several federal trademark registrations.[1]   In its complaint, Burberry asserts its registration rights, including the Burberry Check registrations shown below:

Some representative Burberry products submitted as specimens of use for these registrations include the following: 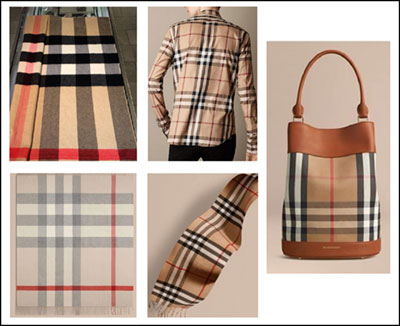 In its complaint, Burberry shows side-by-side images of its genuine scarves (on the left) and the Target scarves that it alleges infringes on its trademark rights (on the right):

In addition to the scarves shown above, Burberry complains that Target also sells other items that infringe on its Burberry Check trademarks, including the eyeglass case, luggage, and water bottle shown below: 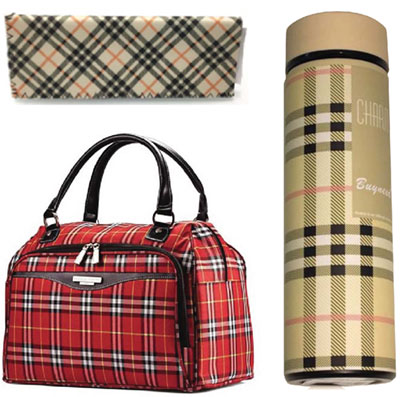 As of the writing of this article, these above goods were no longer available on Target.com (although a variety of other plaid patterns were available).

This is not Burberry’s first time protecting its plaid design against big box retailers.  It will be interesting to see whether this case plays its way through the courts, but if prior Burberry cases serve as any indicator, we expect this case to settle out of court.  For example, on February 9, 2016, the luxury brand filed suit against JC Penny accusing the retailer of selling “inferior quality” knockoffs bearing Burberry’s checkered pattern as shown in these JC Penny designs[2]: 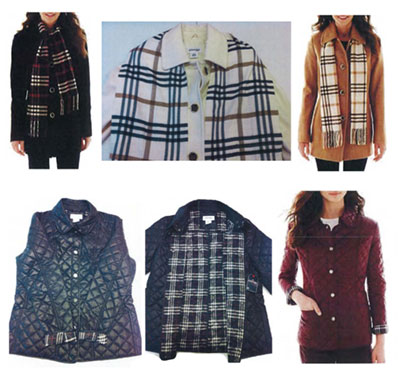 Less than one month after filing the complaint Burberry filed for voluntary dismissal of the action. Burberry had also previously filed and settled similar suits against Iconix (owner of the London Fog and Joe Boxer brands) and TJX Cos. Inc. (owner of off-price department stores TJ Maxx and Marshall’s).

The Burberry cases are a good reminder to designers that trademarks are not limited to words and logos, but can extend to fabric designs that have acquired distinctiveness.  The line between inspiration and infringement can be very thin sometimes, and a best practice is to check and see what IP rights the owner of the “inspiration” has and how aggressive the owner is in enforcing those rights.

Written by: Charlene A. Azema and Jeff Van Hoosear