Last week we analyzed the 1,000 most active companies by the number of patents to identify the top five with the highest cost of prosecution (Patexia Insight 82). We believe companies increase their spending on prosecution if they think the underlying idea is important and may gain a large market share in the future. This week, we are going to estimate and model the quality of portfolios to see if we can find any correlation between the cost and value.

Understanding the relationship between cost and value is important for corporations as it can shed some light on the opaque nature of intellectual property value and its accounting in corporate balance sheets.

Independent board members and corporate audit committees can use this information to understand if a company is making adequate investments and if relative to competitors, their investments are reasonable.

Using Patexia Prosecution Analyzer, we calculated the average USPTO fees for about 1.6M patents issued to the top 1,000 most active companies we listed in our latest Patent Prosecution Intelligence Report. The average was $3,348 per patent. We calculated that the highest cost of prosecution was for the Seattle-based IP company, Intellectual Ventures with an average USPTO fees of $10,668 per patent. However, as it was evident from the numbers in the top five, the cost dropped significantly to $6,643 for Genentech, the fifth company on the list (table below).

The following histogram shows the distribution of the average prosecution cost (USPTO Fees) for the top 1,000 companies (only for the utility patents) for the period of 2015 to 2020. As expected, the cost for the majority of companies was around the mean ($3,348) and median ($3,459) with a few outliers all the way to $10,668 for the IV portfolio. 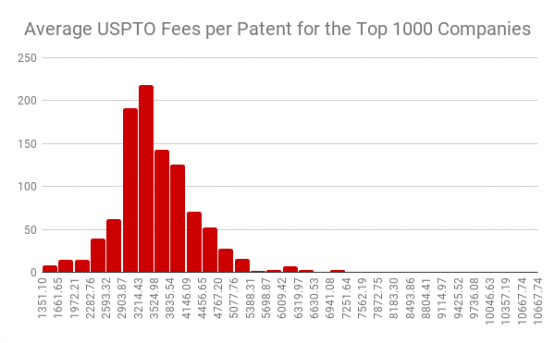 The question we are trying to answer now is whether there is any correlation between this prosecution cost and the real value of those portfolios.

The value of a patent is directly related to the market covered and protected by its claims. But at the time of filing, if the idea is truly novel, there is little or no market for the idea. Gradually and over time, the market may shape and grow if the idea is useful.

While it is almost impossible to know and measure the correct future value and its growth rate at the time of filing or even in early years, there are many signals that we can extract to build a weighted function which may correlate with the real value of the patent. For example:

We only explained some of the popular signals, but the patent data can be combined with financial data, R&D spending of the company and its relative size as well as popularity (market size) and maturity (market growth or decline) of the technology to generate other useful signals.

For example, using artificial intelligence, we developed a tool to measure the historical R&D investment or technology acquisition of a company and its comparison with the competitors, in order to discover gaps, strengths and weaknesses of a portfolio (Patexia Insight 71).

We used the combination of above signals together with some other signals to come up with Patexia Quality Score for each patent as well as the company’s patent portfolio. For this study, since we only looked at the most recent 5-year period, the impact of forward citation and age (renewal and maintenance) was minimal. Nevertheless, for the sake of comparison, we calculated the Quality Score for each portfolio for the period of 2015 to 2020.

From our original list of 5 companies with the highest cost of patent prosecution, only Intellectual Ventures was among the top 5 in the highest quality portfolios with a score of 71.5%, which was almost equal to the first company, China Academy of Telecommunications Technology (Quality Score of 71.6%).

China Academy of Telecommunications Technology is the parent company of Datang Telecom Group.

To better understand the Quality Score, we generated the following histogram for all the top 1000 companies. As you can see in the chart, the distribution is almost normal with the average around 55%. 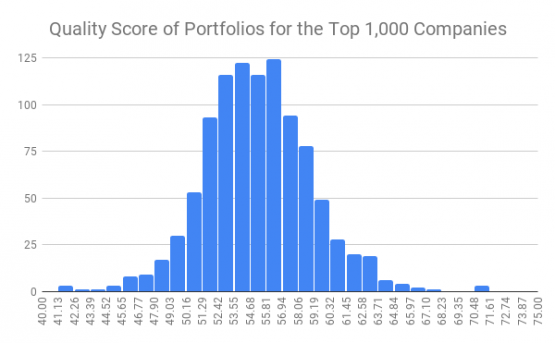 Prosecution cost can be one of the signals indicating the importance and value of a portfolio. When combined with other signals such as renewals and normalized by technology or IPC for related portfolios, it can become a much more relevant and powerful signal.

We applied our model to the entire list of top 1000 companies. However, the measurement and comparison may be more relevant if the data is sliced by sectors. For example, pharmaceutical companies seem to have higher cost of prosecution compared to other technology areas.

Patents are similar to startups. At the time of filing, the new idea does not have any meaningful market. Forecasting the market size and its growth rate in the coming years is almost impossible. However, over time, as more useful signals can be extracted from the portfolio and its comparison with other companies, it is easier to assess the relative value of a portfolio.

This data can be used to optimize portfolios by finding strengths and weaknesses or gaps. Also relative comparison can reveal useful information such as similarities between products of two companies and the upcoming trends (rapid changes in the portfolio mix).

Corporate audit committees and independent board members can also use the data as a measure to understand if the R&D spending is comparable to other companies in the same sector and if the prosecution cost as well as the value reflected for the IP in the corporate balance sheet is justified.

As Warren Buffett says: “Accounting is the language of business”.

Special Promotion: The above analysis was conducted using Patexia Prosecution Analyzer. There will be a 15% discount for the annual subscription of the analyzer throughout May (offer valid until June 1, 2020).